Do you need Mould Removal, Mould Cleaning or Mould Remediation?

Whether you are a Home Owner, a Property Manager, a Construction company or an Insurance Company executive, Mould is not just a nuisance but a potential health hazard as well.

We are Mould Removal and Mould Remediation experts in Melbourne. Our services include identification of Mould, source of Mould growth, Removal of Visible Mould, Anti-Microbial fogging to sanitise air and tips to prevent further mould infestation and growth.

What is Mould and How is it caused?

Mould is a fungus that looks terrible and can cause major health risks if not checked and removed. It is caused by excess moisture in damp and poor ventilated areas mostly bathrooms, laundry etc. Generally, mould requires moisture and an organic surface to grow on.

Other cases of Mould growth will be from water ingress due to burst pipes, overflown laundry or bathrooms etc. All of these events can cause mould growth on walls, Ceiling, Floors including Carpets.

Mould can blacken the shower tiles grout lines and silicone sealing. It shows up as black spots on the ceiling and walls. It releases microscopic spores that can cause bad odour and allergic reactions. 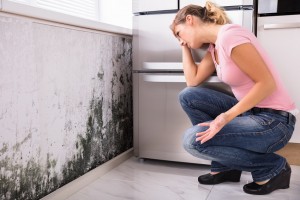 How do I identify if it is mould?

The most common visible mould is called mildew. It starts as tiny, usually black spots and then grows further into large mould colonies. Shower grouts with mildew might just dirty.

To distinguish, just put a few drops of bleach on shower grouts and leave it for 10 min. If the blackish grout lines lighten, it is mildew, otherwise dirt. Be careful when using bleach, as bleach can harm your skin as well as floors if spilled.

How is Mould Removal Melbourne done?

A common question that we are asked is what type of mould we can remove. We remove all types of mould including the highly toxic black mould also known as Stachybotrys Chartarum.

We use four steps for the effective Mould Removal process.

What do I need to know if I want to attempt Mould cleaning myself?

Before you consider cleaning mould yourself, you need to know the below:

How to Prevent Mould in your homes and offices?

Other related cleaning services that we offer:

Should I just paint over mould?

The short answer is No. Paint doesn’t kill Mould. Yes, you will not see the unsightly mould for a short while but it continues to grow under the paint and continues to pose a health risk for the inhabitants and soon will show up again.

Should I continue to stay in my mould rental property?

No! If you suspect a mould problem in your rental property, raise it with your landlord or property manager. Since Mould can affect the health of the residents, it is in their best interest to get the mould issue remediated professionally to avoid any legal ramifications down the line should it impact the tenant’s health.

Can I clean the Mould myself?

Though minor mould issues can be attempted as a DIY. However major mould breakout is best left to mould removal professionals.